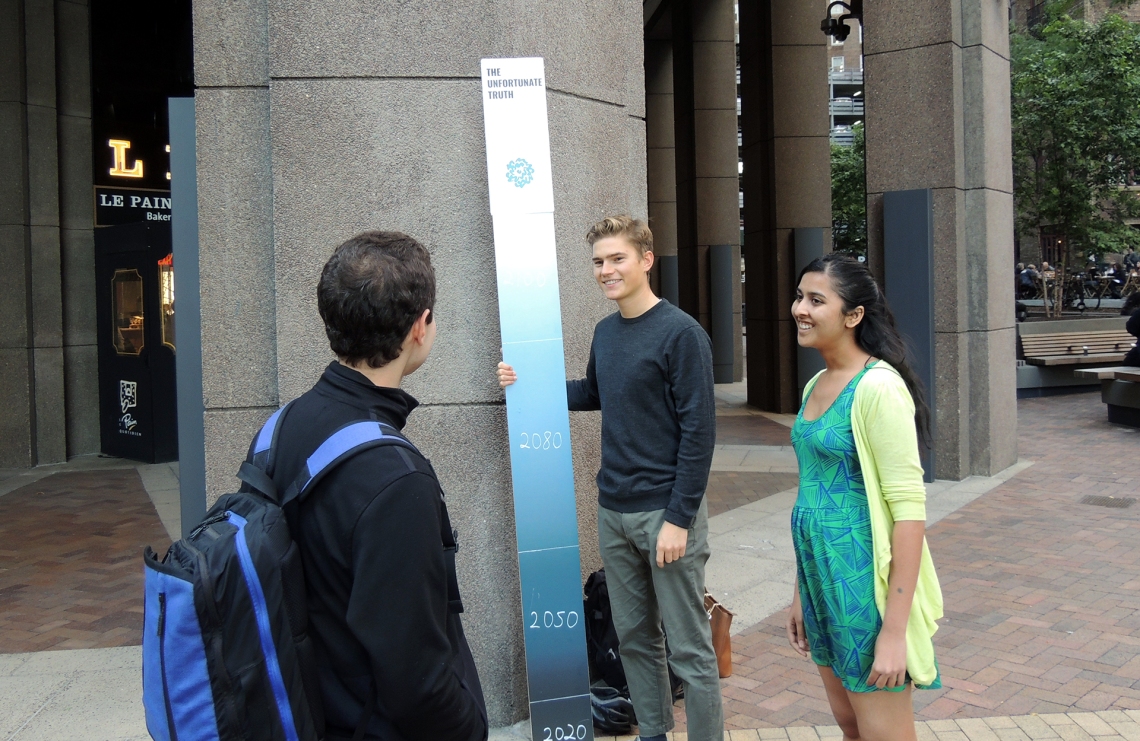 The project unfolded around the challenge of designing a piece of speculative design that would scare people and make them take action towards global warming, which developed from the 2030 Sustainable Goals, specifically building sustainable cities. From there this call to action took many forms, but the premise remained somewhat the same. Make people take action using fear, urgency and negative consequences.

Both, primary and secondary research were vital to drive our project towards an idea that would resonate with people. This included going to public spaces and observing people’s behaviors. Which was helpful, especially at the start of the process, because we made a few assumptions about their behavior, and as we discover must turn to be false. We also did secondary research (studies, and statistics) this grounded and validated our insights and ideas.

Then we brainstorm on possible strategies we could direct our piece too. Some of them included narratives such as “ Fuck, the Polar Bear, Save Yourself,” or “He is homeless, but he knows how to survive in an apocalypse, etc. After testing out some ideas and talking to design professionals whose focus relate to our projects, we decided to focus on the Financial District, the main reason being the high risk of flood. The fact that it’s a low line area makes it susceptible to the upcoming disasters. Other reason for us to chose this audience was that they have the power bring change. Their voices are heard, and their views resonate with a broader audience.

We wanted to design a piece of speculative but were also interested in a tangible experience to make users actively interact with it. After some iterations, and brainstorm sessions, we created a “Can you guess the Sea Level Rise in 30 years?” placard. We were aware that people from the Financial District like gambling and betting, so, we decided to incorporate that feature into our design solution for the audience to be excited about the intervention and participate. This became a tool for us to start the conversation with people working in the Financial District. Addressing climate change, how and if their companies had plans to relocate, their fear of a tsunami, and whether or not they would donate to a local non – profit that could help reduce (Acadia Foundation, in this case).

This Sea – Level slab made people guess how bad or good the sea level would get. It seeks to remind people in the Financial District what could happen when the sea level rise. After they made their guess, they were shown what the actual level would be and got to compare what they thought to reality. Having their past experiences and the potential future meet was a powerful reminder to take action now. Then New Yorkers were presented with an organization whose focus is to build a more sustainable future, the Acadia Center, and were invited to donate. When people feel part of the solution, they jump at the chance to help.
We learned people do care they just need clarity on how to help.

View all posts by sophcarrillo

This is a text widget, which allows you to add text or HTML to your sidebar. You can use them to display text, links, images, HTML, or a combination of these. Edit them in the Widget section of the Customizer.
Loading Comments...
%d bloggers like this: