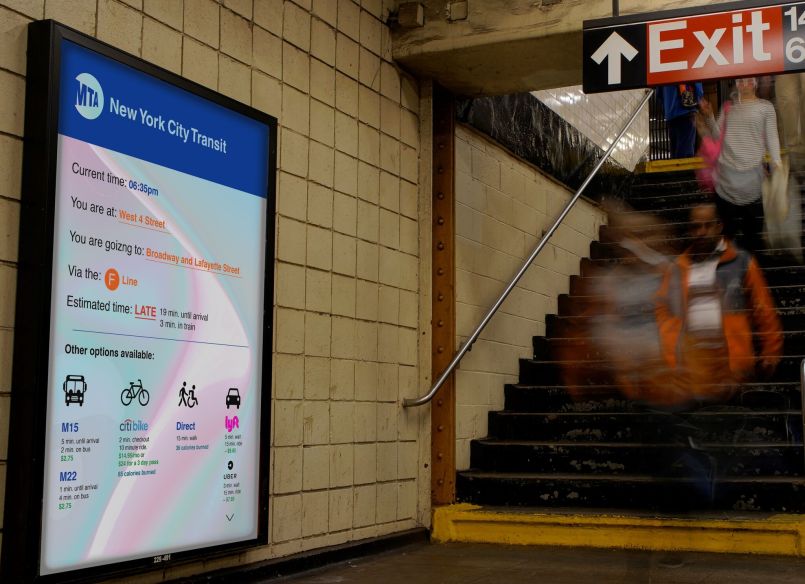 This project addresses the challenge to motivate transporters to consider and utilize multiple modes of transit. It creates an analog and digital visual signage/navigation system that would be available in subway and bus stations. The visuals are aimed towards all New York City transit riders and within the framework of the MTA.

Currently, the NYC MTA subway stations have a few full subway spider maps throughout each station and in some stations, there are digital real-time signs. None of the stations have visual bus maps or bike maps posted making it difficult for riders to find a quick alternative without turning to their smartphones. If a train is at capacity or delayed, riders are more likely to wait frustrated at the station without little thought to what other options might be available. With our visual spider maps for the bus and bike routes, it would be easy for riders to gage where they would like to go and what other routes are available to them if the subway is no longer an option, or a slower option. Additionally, the project created digital signage that would also relay alternative routes and modes by stations which would be even more beneficial as they would include real time data and what routes are actually faster based on traffic at that moment.

Sustainable transportation heavily relies on mass transit and rail, but when the trains are too crowded and overpopulated that they cannot carry people from one place to another in the most efficient manner, they turn riders to less sustainable options such as taking CO2 spewing taxis and ridesharing vehicles. These visuals would not only relieve riders from their frustration with the MTA, delays and over-crowded trains but it would also relieve the MTA so that they may proceed in maintaining and updating the subway network so as to better handle the city’s growing population and ridership and allowing transportation to continue to be a sustainable option. A strong transit system is a balanced system, where riders have the opportunity to choose a bike for a shorter distance, a bus to areas the subway won’t reach, the subway for longer distances and cars whenever necessary. Our signs would help facilitate the balance and open riders to the transit opportunities that await them.

Our interviews with designers, pedestrians, riders, and transport professionals shaped our project’s area of focus and deliverables. We began with a wide scope that was mostly focused on cyclists and bike-sharing, the project was eventually shifted to ease the capacitive stress of the MTA subway system. We learned that the problem isn’t always what if appears to be at first glance and it’s important to talk to professionals in the area to better understand the problems as well as what the riders interpret to be problems as well. We also learned that approaching an organization such as the MTA requires much more time, patience and ideally an insider.

The next step for this project would be to gather more information from riders and from transport professionals. It would be important to look at subway stops that are routinely overcrowded or “problem stops” and then target these stops as trial zones. This would include more prototypes, handout maps and stickers that people could easily take and use from the subway stations, a sort of campaign to get the word out and for people to understand and use the new prototypes and route aids and then eventually to bring this data to the MTA for feedback, implementation possibilities and then testing whatever prototype comes out from their meeting. Because transportation is something that everyone uses it would be valuable to get more people involved in the issue so as to create more pressure for the MTA to make a change, but also so that the MTA is addressing the problems that the riders truly face.

View all posts by antyawaegemann

This is a text widget, which allows you to add text or HTML to your sidebar. You can use them to display text, links, images, HTML, or a combination of these. Edit them in the Widget section of the Customizer.
Loading Comments...
Comment
×
%d bloggers like this: